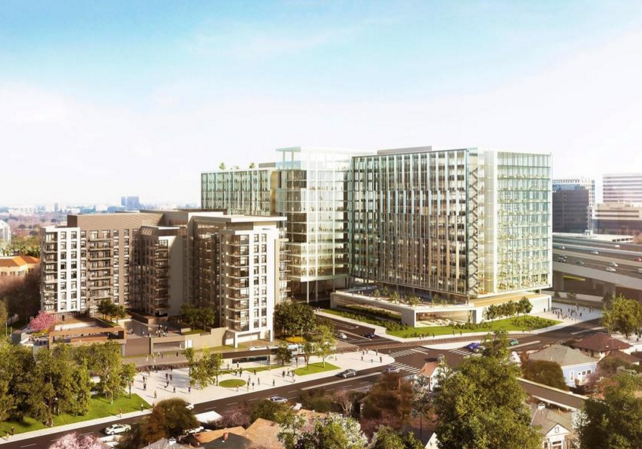 The whispers and rumors around downtown San Jose over the past 6 months have turned from casual conversations to front page news: Google has office plans for San Jose. The timing of this news from the city’s perspective could not be more appropriate, as the center of the Apple world converges on the San Jose McEnery Convention Center for the World Wide Developer Conference this week, not only bringing 5,000 application developers from around the world to San Jose, but also the Tech world’s media. So whether intentional or not, and whether Google was on board with this release or not, the good news for downtown may have been more noticed this week than any other week this year.

News release timing aside, what does it mean for downtown to have one of the Big 3(Apple, Facebook and Google) corporations within it’s borders? It means several things both positive and negative.

With a Google campus of up to 6M sqft comes 1): bodies. Maybe the most important aspect of a large corporate campus in downtown is that it will bring 15,000-20,000 workers to downtown throughout the work week. To put that number in perspective, depending on your definition of “downtown,” there are around 50,000 workers and around 20,000 residents on a given day. Historically downtown has struggled to meet a critical mass and density of people to attract and support basic neighborhood retail necessities, adding tens of thousands of new workers helps that cause.

If Google does bring 15,000-20,000 workers, that would increase the daytime worker count by 30%, which brings us to the the second positive 2): tax revenue. This is both a positive and a negative, the negative will be covered further down. The city will gain significant new corporate tax revenue from Google working in the city limits and help to decrease the housing/jobs ratio that is ever present in most city council conversations around development. The city could also benefit from increased sales tax from workers spending money on food, drink, and entertainment. These tax dollars are highly coveted by a city that is struggling financially.

With the development of Diridon Station and the Diridon Station Area 3): downtown’s urban footprint will expand. A Google office in conjunction with a new Diridon Station, will be the two catalysts of urban growth for all of downtown, and will especially impact those few underutilized blocks surrounding the future campus and the station. This relates back to #2, but it is time for the land with the most urban development potential, to finally be developed and to start producing for the city and the citizens. More housing, more office, more retail, more hotels, and more entertainment, will help the San Jose economy.

San Jose is quickly adapting to new industries again becoming a leader in AI. This new Google R&D campus could focus on AI which means 4): that SJSU could become a university leader in AI. NVIDIA is also looking to partner with SJSU to begin teaching Deep Learning on campus. This rapidly changing industry could see exponential growth. And with a $700B company’s outpost a mere blocks away, SJSU could rapidly change as a university, with a new focus on AI research and bringing in millions of dollars in support.

But maybe more than all of those important positives, Google in San Jose, in downtown San Jose 5): significantly shifts downtown’s brand, perception and legitimacy as an urban destination. Landing a Big 3 carries a significant weight and prestige to it(this will also be covered in the negatives). These names are synonymous with quality and striving for the best and highest standards. Downtown has struggled with perception and branding issues even with the successes of the SAP Arena, San Pedro Square Market, and the numerous cultural destinations and events. Having a global name gives a presence to downtown that hasn’t been felt since Adobe put its roots down two decades ago.

Sales taxes may not be that positively impacted 1): due to the traditional corporate campus design. An acquaintance remarked that he hoped the Google campus downtown wasn’t going to be an “ant hill.” It is a fair description. A building much like what Adobe’s HQ is, completely insular, where all the needs of the worker’s are met, and venturing out into the urban environment becomes an inconvenience, unnecessary, and uncomfortable. In this scenario, the city will not see a large increase in tax revenue from retail businesses because eating, drinking, services, and entertainment are all provided inside the Google campus, free of charge. Not only does this effect the city’s bottom line, it detracts from the urban environment and sucks the life out of the neighborhood.

Similarly, another potential pitfall is 2): if the city is just happy to have Google here and let’s the company dictate the design and planning. From the early reports the campus sounds permeable, with mixed-uses and public spaces. But Tech companies are notorious for privacy, especially around parking, not willing to share parking with the public out of security concerns.

On one side, the increase in jobs does help right the jobs/housing imbalance in the city, but we’re in a housing crisis 3): adding thousands of new workers to downtown will only exacerbate that shortage as they look for nearby housing, and will make it even harder to build affordable housing. As of today, 06/06/17, there are 16 for sale listings in 95112, 1 in 95113, 17 in 95110, and 25 in 95126. These are the 4 adjacent zip codes to the proposed Google campus. A total of 59 housing units for sale, none under $500,000. 95113 came 9th on rental prices in the Bay Area and the highest in San Jose. No developer can say that there won’t be demand to build housing. As soon as this project gets the go ahead, most if not all residential developments in downtown should begin construction(unless there’s a continued labor shortage leading to high construction costs).

San Jose is one of the most diverse city’s in the nation, and it is well documented the diversity disparity in Tech and specifically at Google 4): Will Google continue to grow the Man Jose label or unequal pay for women? Are the social issues that the Tech culture perpetuate going to plague the Google campus in San Jose, or will San Jose’s leaders stand up for these social issues and demand that they are addressed? Considering Google has campuses in many cities, the only culture change will probably be to San Jose.

When Google comes to town it’s a big deal, and we as San Joseans should rightly be excited and encouraged. As an urbanist, I’m cautiously optimistic, knowing that the positives come with many potential negatives. In the end, Google in downtown is better than several thousand empty parking spaces. But without a plan, a voice, or a seat at the table, a Google campus in downtown could have unintended consequences. As a community, let’s make sure we are part of this development, and that it isn’t something that just happens to be in our community. Rather, that it is Google who integrates into San Jose culture.

2 thoughts on “Google’s office plans for downtown San Jose: The positives and the negatives”